My defences against verbal abuse are strong; walled-off and defended after years of boarding school life, away from the relative safety and protection of family and home. I am numbed, emotionally starved, often lonely and miserable, having been relentlessly taunted and harassed in a sexual way that has reduced me inwardly to a confused, fearful victim, in spite of my personal motto: “Sticks and stones may break my bones, but words alone can’t hurt me.”

Somehow my 5th Form peers know that now. They planned a different kind of lesson for my impregnable defences. They conceived a humiliation to break through all my psychological defences to expose the softest, most precious and purest part of me; under the nose of authority, but hidden from its judicial and often conveniently averted eyes. The weeks of ongoing threat became a kind of personal torture.

So this is how the attack came about. The assault – the rape. I now realise that my lingering terror is not so much about what has actually happened, as about the imposition of power and control over me, my helplessness, my anticipatory fear of what they might next do to me; all in the macabre silence of the dormitory that had, till that moment, given me some sense of nightly security and escape from the clamour of school life with the daily abuse that infected me. Now I am not even feeling safe at night.

I have learned that it is so often the case that rape is carried out by people close to us and who know us. The very people we might expect and need to trust.

I sleep very little that night, shivering for hours with fear and after-shocks; hating these boys who lie in their beds around me. Yet I stay silent. Silent in my bed in stubborn refusal to let ‘them’ have the satisfaction of evidencing my pain, of sealing their victory. My old motto now becomes redundant, as I determine to prove to them that even sticks and stones can’t hurt me. 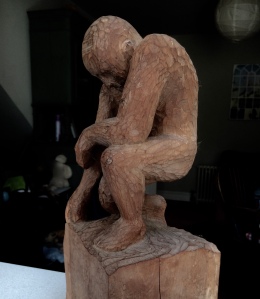 The figure has power, but is only aware of his vulnerability & shame.

I know I have to hide my shame above everything. I also decide that I will not report this to my House Master. I will tell no one. I learned years before that you never squeal on your peers. The potential reprisals are just too big to contemplate, and I want to show them my courage, that I can stand up to them on my own.

The next morning I will get up as usual and carry on as if nothing has happened. I will not even show a sign of resentment, let alone victimised hurt. I will hold my head high and carry my pain so deep inside that this incident will be forgotten within a week and purged from my memory within a month.

How wrong I am about this!

Looking back I won’t remember any detail of sleepless nights or nightmares following the attack. I won’t have clear recall of what inner pains I went through. But I will remember continuing as usual the next day and for the rest of that term; and I will find, much to my surprise, that a boil has been burst, the oppressors have taken their pound of flesh, I am seen to have been punished whether I show remorse or not. In the aftermath, I believe I gain their respect for being able to carry on without attempting to report them, without wanting an eye-for-an -eye or a tooth-for-a-tooth, or without breaking down in any outward way.

I have a renewed yet subtle sense that a benign force greater than I can imagine is lifting me up; has always been there, even in the darkest of times. He or She cannot protect me from experiencing life, but if I could only trust the faith, I will know deep in my heart that I am being held in a loving way, by something universal and ultimately beyond normal comprehension. It is not specifically a Christ figure or a Being of any kind, I will struggle to name it God, but the subtle energy is real, when I look for support and tune into it.

I have no intention of giving up my links with the Stage Staff and come the following year, as rehearsals for the opera require the leading ladies to arrive on our stage several evenings a week, I will find myself attracting the attention of my first love in the form of Marian, who saves my life, confirms my heterosexuality (though we never actually lose our virginity together), and will provide me with a hugely healing distraction from my past struggles.

In those last two years of school, I and my classmates will grow into a new level of maturity, creating fresh and positive relationships together, with mutual respect born of the stresses of ‘A’-level studies and the pressures of the much-anticipated university applications, on which our futures will depend. I say ‘we’, but I alone among my peers apply for a place at Art School, attend an interview and am accepted on the basis of my portfolio with the condition of only modest A Level results. This gives me yet another privilege as the stress of revision and exam-sitting begin to loom. Everyone else is having to buckle down to make their A and B passes, while I can relax and enjoy the best of the A level english and history classes with teachers I like, and with plenty of hours free in the Art Department.

Only much later will I fully acknowledge the trauma of boarding school. Much later will I learn to see how over-forgiving I am by nature, preferring the passive route to any form of outrage that would honour violations of my boundaries and change a lifelong tendency to let others take advantage of me.

The sun shines and as we move into summer and our final months together at school, I can feel the warm healing strokes of creativity and freedom, that are the hallmarks of Art school life, reaching out to me with the 4 years to come. No rush to throw off the heavy brown school uniform, or to don the colourful t-shirts and loons which become the emblems of my coming-of-age time, 1969 – 1973; with Flower Power, the Beatles, The Rolling Stones, Bob Dylan. Though actually my more gentle music of taste will be Joni Mitchell, Donovan, the Beach Boys and Crosby Stills Nash & Young.

In these days and in these ways, I will leave the dark days of school behind, with happy memories of the Sixth Form, of just a few friends from that time, of a first love, of starting to address the complex questions of what it means to be a man in the atomic age, the arrival of feminism, freed from the rules of a dying victorian worldview, with everything new and fresh to look forward to.

I have learned to detest hypocrisy and yet I will carry the hidden chains of Patriarchy deep inside my system for the rest of my life. The lack of confidence and self-belief that these early influences engender in me will continue to undermine my creativity, my sovereignty and my natural mysticism for many decades to come. I will continue to hide my sensitivity and fear behind a mask learned at school. At age 39, in a psychological training designed to explore and heal personal wounds, I discover two particularly significant facts about myself that will unfold later:

There is a character in me, who is obsessed with hiding and with safety, who lives by the motto: “I would rather be a blank page than be read and misunderstood!”

There is another character in me who feels deep empathy with women who have suffered sexually at the hands of masculine abuse, and who also attracts vulnerable women to me, such that they are able to confide in me as a gentle safe man, in order that they can face their demons and learn to trust men again.

I will continue to distrust men through my adult life and only gradually, in the controlled environments of Men’s Groups and Men’s Rights of Passage, do I address my wounded relationship with men directly.

This two-part article is one of a number of ways that I am trying to find peace. I have undergone many years of therapy and psychological trainings without getting to the root of my neuroses. Spiritual practice has been a huge support, and I will write about this in other articles, but as yet I am still dominated by the experience of a ‘suffering’ ego. By writing this account of school life, and expressing it in the present tense as a way of reliving the painful experiences of fifty years ago, I hope to finally loosen the grip of the wounds to my emotional self, of my distorted behaviours and of the limitations to my confidence as a man and a healthy human being..

The material is very personal and intimate, but I have decided to defy my tendency to hide and risk exposing my truth regardless of any consequences. This feels very timely when so many women have been bravely speaking out about sexual abuses they have suffered. The effect is a social movement and cultural shift which is exposing the climate of patriarchal power that has allowed men for far too long to normalise what is totally unacceptable behaviour.

To close I want to note that we all have an inner rapist, but unless we are prepared to own and make conscious the instincts and emotions surrounding this, we are all at the mercy of the destructive effects of acting out or projecting onto others. Truth telling and awareness-raising are the key to a healthier life, for each of us individually and for society as whole.

Evolutionary Counsellor facilitator and guide on a spiritual path. Craftsman in wood, creative writer, environmentalist & change agent. This blog is my way of promoting my skills, ideas, concerns for the planet, creative work, spiritual searches and philosophy of life in a public forum.
View all posts by Inner Ventures →
This entry was posted in Articles by me and tagged abuse, Boarding school, coming of age, courage, me too, sex, shame. Bookmark the permalink.

This site uses Akismet to reduce spam. Learn how your comment data is processed.